A big thanks to my many friends.... 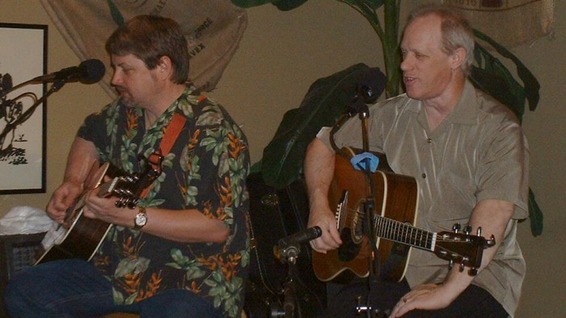 Mark Moore  guitar legend and I performing at Picasso's in O'Fallon 2006. Mark and I first met when I auditioned for the St.Louis top 40 cover band KIDZ back in 1980. I got the gig and a life long friend. We made alot of great music together but in 1985, went separate ways as far as music was concerned. Mark always loved the blues, and that is the road he followed becoming a premier St. Louis blues guitarist and releasing a disc with his band, the Smokers titled ONE LONG ROAD. Around 2005 we hooked back up and started doing some live shows together. We had hopes of pursuing this futher and recording some music and possibly a band but Mark was stricken by a illness and taken from us January 26th 2009. As far as guitarist went and friends as well, there were none better! I miss you my friend! 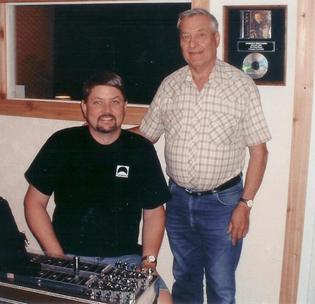 Recording my two CDs in Nashville was a honor that is hard to describe. The people that I met and got a chance to work with are without a doubt the best! Larry and Kim kept me in awe everyday and the constant flow of musicains that Larry kept booking for my sessions really boggled my mind. With that being said, I have to say that the person who really took the top honors of blowing my mind was DUANE MARRS. In my mind a country song in not a country song without steel guitar. Duane could come in and give a song a listen once, do a quick run through and then lay down the most awesome steel tracks I ever heard. Literally making my hair stand on end everytime. His instincts of what a song needed were just incredible. By the time we got to recording my second CD Wrong Side Of Love, Duane would come in and just lay it down. Nothing needed to be said as far as "well I was kinda thinking this for When its right".... no need to. Duane knew. And every time he nailed it to a T. Not only was he a great player who played with some all time country greats, he had a long tradition of building fantastic steel guitars as well working with Shot Jackson at the old Sho Bud factory on Broadway in the late 60's, 70's & early 80's.

A few times I was lucky enough to get to spend some time at his shop. We also had the Machining in common. Duane could not only play the snot out of a steel guitar but knew his way around a drill press, Lathe, mill... he and Jeff Surratt ( also a great steel player who played on  my first disc) manufacture  some of the best in the world in Madison Tn. You never know who might drop by to get a adjustment on their rig. One of my great regrets is that I did not get to record more with Duane, as he was taken from us a few years back.
Jeff Surratt continues the great tradition of Steel playing and manufacturing. 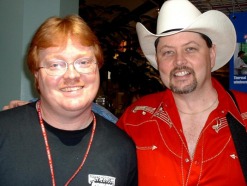 One of the first folk to really encourage my music was Mike Thomas ( MIKEY T) of KFAV 99.9 Warrenton, Mo. The first time an artist hears his song on the radio is a moment you never forget. Mike was the man responsible for putting me on the air first and live on his show many times. Along with Katy Fry & we performed on his Christmas eve show 4 years straight! If you are ever looking for someone who likes to get off the beaten track as far as country music goes, Mikey T on KFAV 99.9 in the mornings is your man! Thanks for the many spins Mr. T! 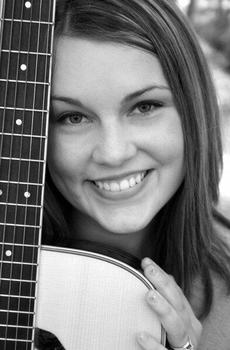 I didn't get it at first when Tom Thompson at the Rendezvous first came up to Katy and I and simply said...CAJUN FRY! Knowing the KILLER food that they have I simply thought it was a new dish and I was getting ready to order some when he laughed & said it again....CAGE & FRY.....YOU AND KATY! Yes, simply put Katy makes me very proud, I have watched her perform from day one literally singing/humming herself to sleep when she was an infant and waking everyone up with a song. We all knew that Katy had a tremendous voice from early on and it has been my honor to perform with her as much as I do....for as long as I have. Love you songbird!
Go to my links page and click on her Soundclick page and give her song, I JUST DON'T KNOW a listen!

To visit Katy's website, ouch the picture on the left. 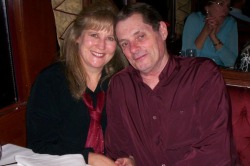 From the get go Tony Slingsby and Robinne Golding put my music on their airwaves on their awesome country  show on WYNFM in Melbourne, Australia. I cannot tell you how much that means to a new artist like myself. There are many times through the years when I think, "well hey, I was a good run while it lasted". A day when nothing is going right, a day when you think everyone has forgotten about you and I get home and get a play list from Slinga & Goldie! Thanks you two! One of my dreams is to finally make it to your awesome country and do your show live! Will it be in 2010? 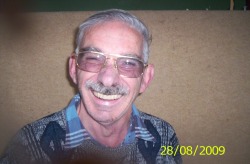 John Goode of Yass 100.3 Australia Has been giving my music a spin since the beginning. If you are an independent country artist, or just a fan of country music of any kind, you might want to check out Yass
http://www.yassfm.org/joomla_yassfm/presenters/122-presenterinformation/13-john-goode
He has a great Sunday show from 7am to 10 am  and "Johns Mix" is every Tuesday from 12 noon till 3 pm.
Thanks for all your awesome support John! 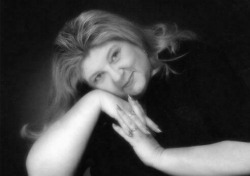 Trudy is another friend mine "down under" that has been spinning my music for years on 88.9 WYN-FM ! For as much as I have talked to Trudy over the years I feel like I know her and she just lives a few miles from me...not A HALF A WORLD AWAY!!! LOL... I sincerely hope that this will be the year I can hit the great outback and do some live shows on the Austrailian airwaves....another BIG DREAM THAT I HAVE! Trudy tells me that although WYN is not currently streaming live, that plan to do so in the near future. Catch Trudy at wynfm@wynfm.org.au and tell her Bobby sent you!